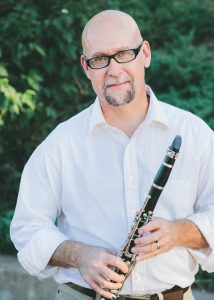 Dr. Brian Ebert is the Director of Bands at Legacy High School. From 2016-2021 he served as the Director of Orchestras and Assistant Director of Bands here at Legacy. Since moving from Fraser, Colorado to the Denver/Boulder area, Dr. Ebert has become a well-known clarinetist, composer, and educator. Dr. Ebert was the Affiliate Professor of Clarinet at Regis University from 2011-2021. Additionally, he instructed lecture courses in music at the Community College of Denver and courses in audio production at the Art Institute of Colorado. Between the years 1997-2012, Dr. Ebert was a woodwind instructor for Pomona High School in Arvada, Colorado, and he has coached high school music programs all across the Denver area.

An avid composer, Dr. Ebert has written works for orchestra, concert band, mixed chamber ensembles, and various solo instruments. In 2012 he was commissioned by Playground Ensemble to compose a companion piece to Olivier Messiaen’s pivotal Quartet for the End of Time. The result was Fragments of Om, a septet which was premiered by the group later that year. His chamber trio Contradances (bass clarinet/contra-alto clarinet, vibraphone, cello) was also premiered by Playground Ensemble, and it appears on their debut release Dreams Go Through Me. His most recent works include flux aeterna (clarinet/bass clarinet, viola, cello, piano), Nocturnes (woodwind quintet), Beneath a Solitary Sky (clarinet/bass clarinet and laptop), and ubuntu (jazz ensemble and laptop). The latter was premiered live on KUVO 89.3 FM.

A native of Kankakee, Illinois, Dr. Ebert studied music at the University of Illinois at Urbana-Champaign from 1987-1989. He has performance degrees in clarinet from the University of Colorado at Boulder (BM/highest honors), the University of Denver (MM), and the University of Northern Colorado (DA). He studied clarinet with Don Kramer, Harlow Hopkins, Howard Klug, Harvey Hermann, Phil Aaholm, Abby Raymond, and Bil Jackson, and composition with Paul Martin Zonn, Luis Jorge Gonzalez, Bill Hill, and Robert Ehle.

© 2019 Legacy Band Boosters Association Neither Legacy High School nor Adams 12 School District is responsible for content on this site.