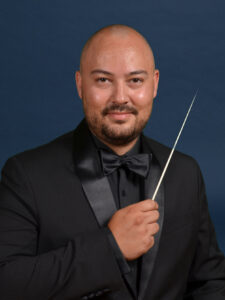 Mr. Trey Tafoya is the Director of Orchestras and Assistant Director of Bands at Legacy High School. While at Legacy, the orchestras consistently receive ratings of Superior at festivals and contests. The Symphonic Orchestra was selected to perform and compete at the ASTA National Orchestra Festival in March 2023.

Mr. Tafoya received his Bachelor of Music Education Degree and Master of Music in Music Education Degree from the University of Northern Colorado in Greeley, CO. He was the Drum Major of the “Pride of the Rockies Marching Band” at UNC where he taught visual marching technique and arranged music for the band. While at UNC, Mr. Tafoya was an active hornist performing in the Wind Ensemble and UNC Symphony Orchestra. He currently plays in the Rocky Mountain Horn Ensemble and frequently subs in community orchestras and bands throughout the Front Range. Mr. Tafoya also performed with the world-renowned Santa Clara Vanguard Drum & Bugle Corps during their 2013 production, “Les Misérables”. His principal teachers include Dr. Richard Mayne, Dr. Mark Montemayor, and Marian Hesse.

Mr. Tafoya lives in Thornton, Colorado with his wife Marissa.

© 2019 Legacy Band Boosters Association Neither Legacy High School nor Adams 12 School District is responsible for content on this site.